ADVOCACY AND CARING FOR CHILDREN
Search

acc@ccsww.org
www.forthechildrenww.org
www.advocacyandcaringforchildren.org
Hours: Monday and Wednesday 10-3
Circle History - St. Therese Circle - est. 2015
The idea of our ACC group started with the Fr. Mychal Judge group.  Kristy Charles was interested in joining their group after hearing about it and attending their fundraiser, but they were full. This made her think that we needed another circle.  She spoke to Sue Richards (Fr. Mychal Judge) about it and from that point on, Sue made sure Kristy stuck with it!  Sue emailed monthly and really pushed Kristy forward.

Kristy’s first step was talking with a fellow school mom, Erin Aitken while out walking.  They spoke about how blessed they were and how they could share their blessings.  Erin was just as excited and wanted to begin immediately. Sue Richards put them in touch with Deirdre Brownlow, office coordinator for ACC,  who sent all the information describing the ACC and how to start a group.

Then Erin and Kristy started brainstorming. They invited other fellow St. Louise school moms: Amy Wilken, Nancy Tribolet, Julianne Read and Colleen Nowak.  From there they came up with lists of people who had faith as well as a kind heart.  They started with all the people they saw regularly at mass. They divided the groups and met with each person sharing ACC and its mission. Amy Wilken suggested St. Therese as the name for our circle.  St. Therese was called “The Little Flower” and she lived with the idea that everything in life, especially the little things, should be done out of love for God and for neighbors. The St. Therese ACC circle was born March 31, 2015.  Six months later we had our first fundraiser, Cooking for a Cause, and raised approximately $4,000.00.

In terms of causes that we serve, we stick with the ACC's goal of helping women and children in the greater Seattle area.  We want our ACC circle to be a place where we can come together to support our community as well as each other.  All of us in this circle give back in so many ways.  However, by joining together, we could concentrate our efforts to give back in a more meaningful way.

BINGO NIGHT WITH St. Therese Circle
Cooking for a Cause Fundraiser 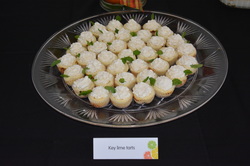 This newly formed Circle, based at St. Louise in Bellevue, hosted their inaugural fundraiser, Cooking for a Cause. Members of St. Therese prepared summer sensational themed dishes that any "foodie" would be excited to serve. The recipes were compiled into an eCookbook, which was distributed to all who attended and donated to the event.

Pregnancy Support provided a compelling speaker, who was able to share a personal story, and help our members and their guests connect wholly to our cause. More than 40 women joined us for a great evening, and we had our own 6-8th grade kids assist in preparation and serving.